When we purchased our chicks from the local farm supply this past Spring, the chicks were advertised as pullets.  Down in the fine print somewhere I am sure was a disclaimer about the actual sex of the chicks.  As the chicks grew, some had some real personality.  One of the Ameraucanas we named Clover, because it loved to nibble clover leaves and would trounce on the other chicks to get to the offerings of clover leaves first. 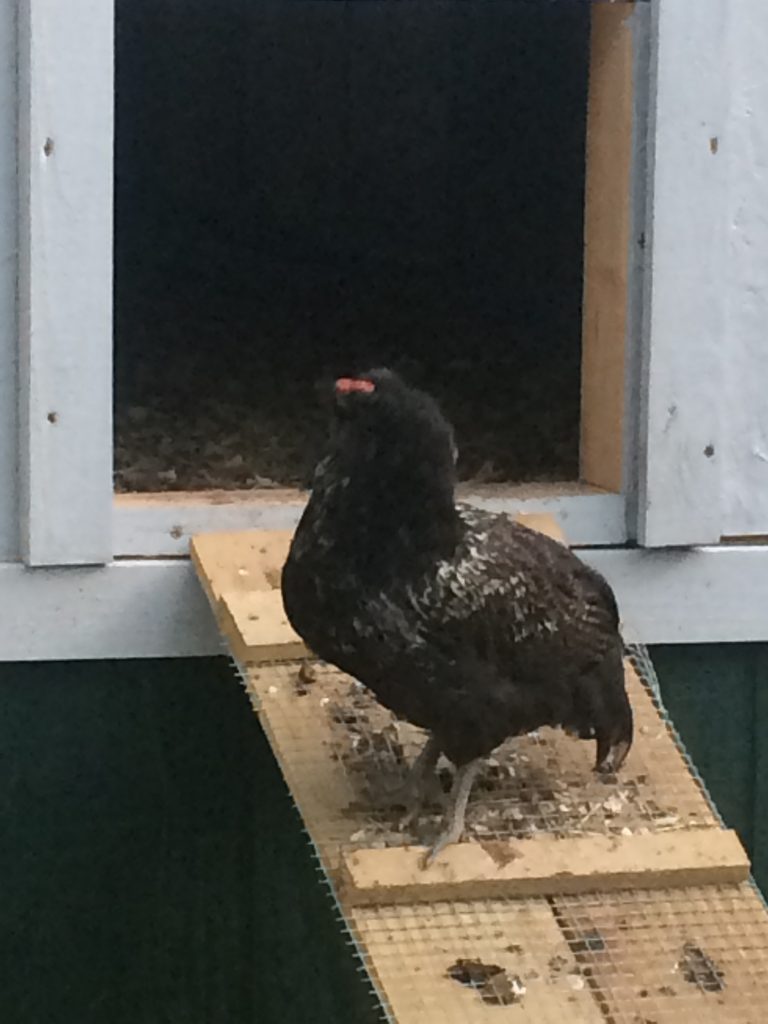 Clover, shown above, developed some fantastic colors in his feathers.  Yes, Clover turned out to be a cockerel instead of a pullet.   So did four of the other chicks.  So out of 15 chicks, 5 turned out to be roosters.  By the time they were 12 weeks old, we were pretty certain several of them were not hens.  By 16 weeks old, it was clear, there were too many roosters.  It took a while for them to get their voices to the point where their crowing was really crowing!  Nearly constant too between the 5 of them.  I’d say the roosters matured a bit faster than the hens.  It did not take long before the hens were avoiding the roosters as much as they could, yet still staying close together as a flock. 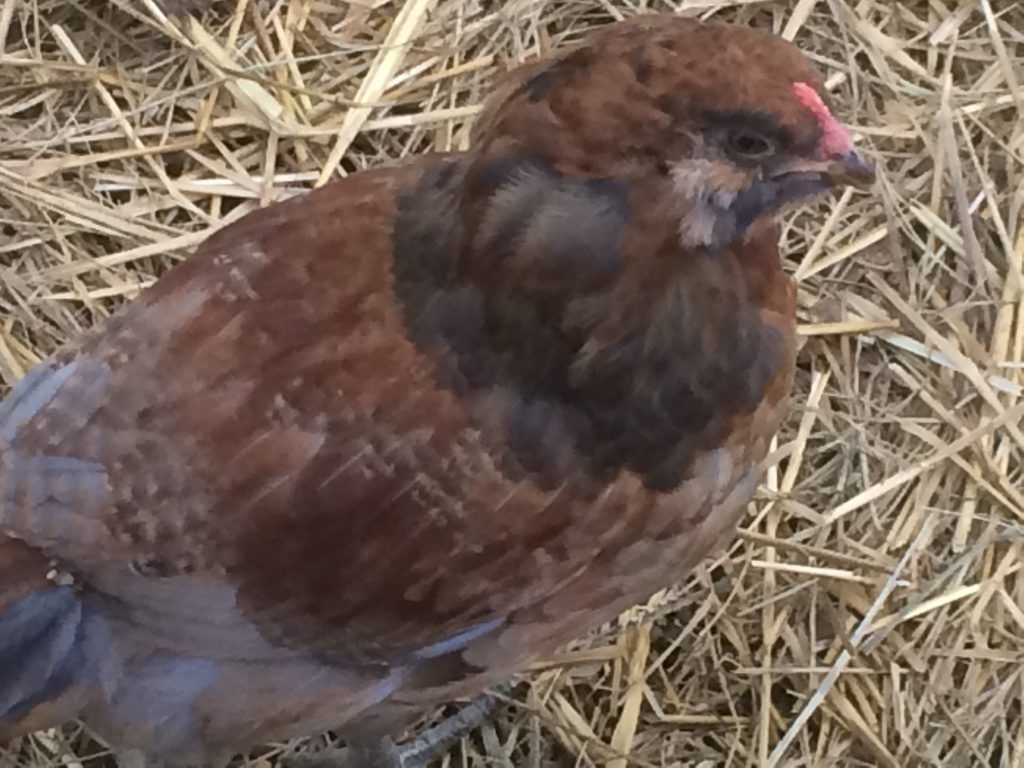 Ginger, named due to “her” color, also turns out to be a rooster.  Also an Americuna.  The chicks we bought, 5 were Ameraucana, 5 Barred Rocks, and 5 Black Laced Wyandottes.  Four of the Ameraucanas were males, and one of the Wyandottes.

At any rate, it was time to convert these roosters from Hen Harassers into Freezer Fowl.  It would be our first time to process chickens.

A quick view of some online videos for killing cones used a really simple and inexpensive method of making a cone.  Simply using a gallon milk jug.  I cut three sides from the bottom, and used the bottom to mount on the side of a tree.  Another couple screws in the main part of the container into the tree and it was well fastened.  The neck of the jug was cut out slightly larger.  It worked amazingly well.

The first volunteer found himself very relaxed in his upside down position, and very calm about the entire matter. 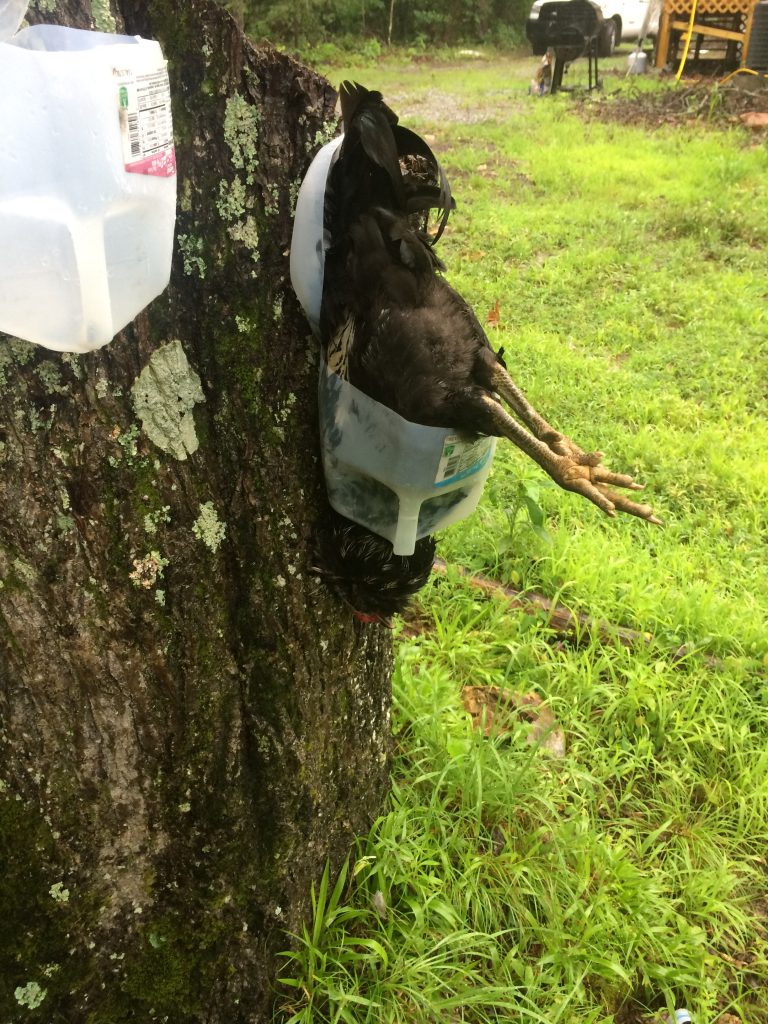 Without going into all the gory details, the roosters lost their heads, and drained out, very calmly.  None of that graphically wild running around like a chicken with his head cut off I recall as a youngster at my grandparents farm.

We elected to skin them rather than pluck them.  Next time, perhaps, we will pluck them for comparison.  Skinning was reasonably quick and not too difficult.

Clearly, the hens knew something was different, and they were very calm and quiet for a few days, but went about their business of free ranging around the place, pecking and scratching at whatever they found of interest.  They do not seem to miss the roosters at all.

As for us, while we did not miss the antics and crowing of the roosters, the downsizing of the flock really was noticeable.  It seemed odd for a few days that there just wasn’t enough chickens running around the yard.  We contemplated getting some more, but eventually deciding to get through our first year with chickens before adding more.  But, next year, more are coming!